I have finally gone into Python web development, as I’m feeling a little tired of waiting for many of Google APIs support for PHP going out of beta since forever.

Knowing that using my trusty USBWebServer + Dropbox combo won’t do it for Python (and my peaking interest for MongDB), I needed to find an alternative development environment.

Initially, I was leaning towards using a virtual machine, like VMWare and VirtualBox and running it in a *NIX environment. However, a thread in reddit mentioning PythonAnywhere caught my attention. 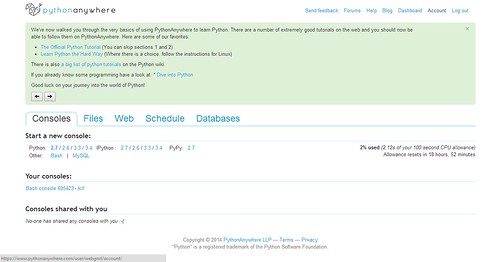 Granted, my preference was to set up an environment that exclusively runs locally on my machine, and can still be replicated with ease, preferably through a cloud storage like Dropbox. Yet PythonAnywhere fitted my requirement in every other way in that it needs little to no installation, supports NoSQL (specifically MongoDB), supports the major Python frameworks (at least web2py), and can easily be ported over to a PaaS provider (Google App Engine being the minimum requirement). PythonAnywhere also rocks in that it supports my preferred VCS, Git and Subversion. Then, the fact that I can set up a sandbox app and let people view my app via a URL once it’s ready is a major plus.

The only downside I see so far from my two-week use of PythonAnywhere is that I needed a stable Internet connection. For now, that isn’t hard to come by.

Posted on 3 August, 2014 under Life at work and tagged with development environment, python, pythonanywhere, web2py

2 responses to “A n00b’s setup for Python web development”