I’m re-posting this from my old blog at LornaTimbah.com, since I wasn’t able to recover my old posts into Tumblr. 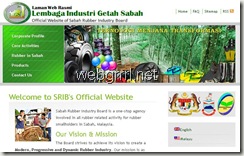 Sabah Rubber Industry Board (SRIB) is the only one using WordPress among the top 20 websites owned by Sabah State Government. The top 20 web site ranking was conducted recently by MSC Malaysia and compiled by the State Computer Services Department.

My brief analysis of the type of CMS used on the top 20 Sabah state website shows the following:-

(list purposely cut off at number 19 for reasons mentioned below)

Overall, 5 out of a total 28 websites listed in the Top 20 use open-source CMS, including Sabah Rubber Industry Board. Important to note that in the compilation document made by the State Computer Services Department (refer page 21), there is an error in the ranking, whereby even though the Public Works Department and SRIB were scored equally, Public Works was ranked higher than SRIB, when the 10th spot was suppose to be shared by both. (addendum: the ranks were also erronously numbered — number 8 jumped to number 10, which means they missed number 9.)

When corrected, the Keningau District Council (static) and Sabah Urban Development Corporation (SUDC) would have been pushed up the ranks and be included in the Top 20 Sabah State Government websites. If that is done, then WordPress would have been represented by both SRIB and SUDC.

Which would have been so cool.

This post was originally created on Fri, 25 Nov 2011 at LornaTimbah.com.

Check out my other posts: « 30-Day Blogging Challenge Day 30: A picture of myself this day and 5 good things that happened since I started the challenge / Speedy Gonzales, or a slow poke: how fast can you blog? »

Posted on 5 June, 2012 under Discovering WordPress, Life in reality