“You will lose everything”

Speaking of Harry Potter, only today did I manage to watch a teaser for its latest, and most anticipated movie installment due to be released July this year. Oh my god, oh my god… just thinking about it gives me a rush!! Among all the Harry Potter books, the Order of the Phoenix is the best yet. Book 5 is where we see all the powerful wizards come together in a monumental magic battle which unfortunately leads to one of a couple of major character deaths to follow. This book is where JK Rowling writes and throws out all the powerful spells Harry needs to learn (through the one teacher that despises Harry the most, no less!) in order to defend from being killed himself. And then there was the appearance of sadistic headmistress Umbridge, and the formation of Dumbledore’s Army (DA), the loyal followers of Headmaster Dumbledore consisting of Hogwarts students, practicing in the Room of Requirements. 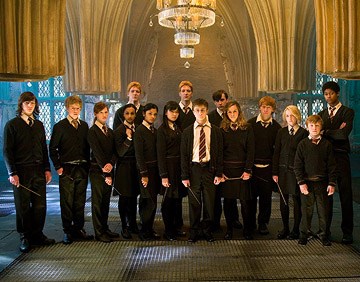 Harry Potter and the Order of the Phoenix.

Check out my other posts: « Hairy Potter and His Horse Dick / Good Malaysian blogs »

Posted on 2 February, 2007 under Web traversing