Sabah bloggers got a different treat this year for the annual gathering, unlike the previous three years. It was more grand and complicated than before, (being that I only realized a couple of days before it happened) that this event, glamorously called B2.0, was going to be held over a 2-day, 3-night period! Wow! 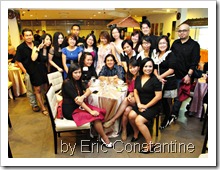 Organized by the team at Borneo Colours (BC), the event started with a preview dinner on 28 October, followed by a seminar on the 29th, then a paintball get-together on 30th morning, and a closing ceremony cum winners announcement that evening. Being caught off-guard by the overwhelming activities at a last minute, I only managed to attend the preview dinner (see me mingle here) and the seminar a.k.a. New Media Dialogue. I was pleasantly surprised to find that the seminar itself was more impressive than I expected. In the morning, for some reason just more than half the seats were filled, but by noon, the place was packed.

“Borneo’s Regional Blogospheres” was presented by three bloggers representing Brunei DS (Marul a.k.a Geek In White), Kalimantan (Dwi Wahyudi a.k.a. Blogger Borneo) and Sarawak (Cyril Dason) regions. I came in late but just in time for Marul’s presentation, so I wasn’t sure whether there was anyone from Sabah presenting at that session (maybe Daniel Doughty’s opening remarks was it?). Overall it was a good warm-up session for what was to come.

“Blog Monetization” by Addy Kho of The 9-Hour Work Week blog was a session that’s right up my alley. His monetizing focus was on Internet and affiliate marketing. When he mentioned using Top Commentators to engage users, my ears perked. My eyes missed the widget when scanning his blog the first time, so I thought he removed it. However, it was actually right on the sidebar slightly way down the website. It’s great to know that Addy further validates the use of TC in relation to increasing readership and subsequently the ka-ching factor.

Reeda Malik a.k.a. AnakBrunei’s session on “Managing Your Personal Brand” led me to ask him this: is it possible (or has there been any case) where a person can successfully separate his online persona and his real-life identity? To be known for his skills rather than his personality? The gist of Reeda’s answer was that more often than not there exist a very fine line in separating those identities, and you might as well be a schizophrenic to achieve that. E-hem. I was hoping I could be like Clark Kent / Superman, you know. Clark being the equivalent of me in real life, while Superman being the equivalent of WebGrrrl, ‘cause we have super cool names, you see. Why, people even mistakenly calls me Lana sometimes, so… *flatters self*.

I’m glad Cyril Dason posed the question on the use of disclaimer in a website after Eddie Law’s session on “Blogging Limitation — Law and Ethics”, which affirms what I’ve known all along about it – it’s useless. It doesn’t protect you from the law. Otherwise if it does, you won’t see so many bloggers in Malaysia go to jail so easily. Eddie’s session garnered the most questions in this seminar, which was a pleasant surprise for me. This shows that we bloggers do care about integrity and civility, contrary to political and contemporary beliefs.

One minute into Rob Angeles’ session on “Effective Steps to Online Engagement”, and you’ll realize that A) he really knows what he’s talking about, and B) he has a great sense of humour. Through his extensive statistics and technical glitches, he kept us guffawing and at the same time more aware of how important social media is for businesses to engage in. Keyword: Enterprise 2.0.

I frankly wasn’t keen on paying attention to “From Zero to Hero Using Social Media” by Ronnie Klassen, a politician who happens to blog. It reminded me too much of my disgust towards the current Malaysian political scene and the fact that I will soon have to vote again for the lesser of two evils. I wasn’t even trying to listen, other than on the part where he mentioned about his top — and most controversial — three blog posts that ended up getting him locked up in jail while earning him a few thousand US dollars per post from Google AdSense at the same time. Note to self: controversy pays.

GreenSurf’s session, especially its videos, kept me back on pace and Harjinder and Alice rocked! “Case Study: Winning Hearts & Minds Through New Media” provided not just the volunteers’ experiences on behalf of Sabahans in acting against the proposed coal power plant in Lahad Datu, but also gave a very honest view on the benefits and limitations of using social media to voice the people’s true decisions and thoughts on this matter.

Joomla made its debut in this dialogue in the form of Azrul’s JomSocial in “Powered CMS”. I’m impressed with this Facebook-like plugin that powers Borneo Colours’ website. This still didn’t stop me from poking fun at Joomla lightheartedly by clapping loudly when Azrul pointed out the stats whereby WordPress has the highest number of plugins compared to Joomla and Drupal. At the next slide, he showed that Joomla plugins were downloaded the most compared to WP and Drupal. I just like to think that this is because WordPress gets more done with less 🙂 Still, I’d like to thank Azrul for even considering WordPress as a CMS.

Then comes Daniel Doughty’s session on “Collaborative Marketing Initiative”. He might as well just call this “What is Borneo Colours” 🙂 In all honesty, I’ve been pretty confused with what Borneo Colours is trying to achieve in the online social media arena. Are they volunteers? Are they doing these for free? Are they commercial? Up to that time, all I see was little transparency, with much hyped superficial activities and bombastic publicity words, and I made sure Daniel knew my thoughts about BC when I chatted with him at the preview dinner. His session did clear it up: BC is a commercial entity with a noble cause, which is to use social media and gather bloggers specifically to promote tourism in the Borneo region. So now that he’s cleared up BC’s business model, how about its revenue model? Hmm.

I always love startup stories, so I really wanted to sit through FlickEvents’ Yan Phun as she talks about her company’s experience in “Start Ups Challenge and Opportunity”. However, realizing that it was time for me to split and pick up my kids from school, I had to rush out and miss most of her talk.

I’d like to add more thoughts on this event, but good golly am I tired (I have another hour left before I’m off to work and I haven’t slept a wink!). So, kudos to Borneo Colours for going all out to organize this event. I can imagine how challenging it is to organize such an event with four regions over three different countries.

Check out my other posts: « giuk.net has surpassed 100 members / Showing the Christmas Spirit on Twitter »